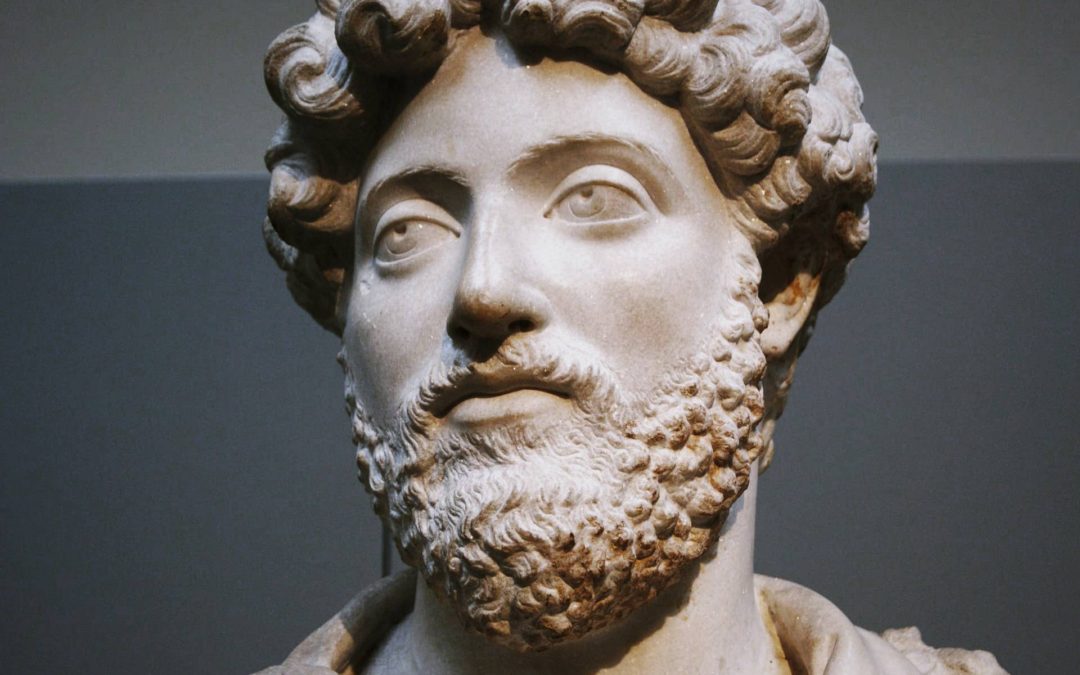 Meditations is one of, if not, the most important text in Stoicism.

The series of personal writings by the Roman Emperor, Marcus Aurelius, has inspired leaders and entrepreneurs in the likes of:

Just to name a few.

In this article, we will take a look at 5 of the most important lessons from Meditations.

Each part has three or four topics that all tie in with the bigger theme. Each topic contains one or several quotes from Meditations, which are useful to remember.

“Do not dream of possession of what you do not have: rather reflect on the greatest blessings in what you do have, and on their account remind yourself how much they would have been missed if they were not there.” – 7.27

We’ve all heard of the phase, ‘happiness comes from within.” But what does that mean?

Gratitude is the key to happiness.

Ok, here’s the deal. Life is like many things, but let’s use climbing a mountain as an example.

When you move forward in life, you climb a little bit higher, but your ambitions also get higher. Once you’ve achieved a particular goal in life, you just set a new one and keep climbing.

So naturally, life is like climbing a neverending mountain. If you always only have your mind on what you desire, whether it’s a new Tesla or a relationship or some sort of achievement; You are always looking up.

Looking up at an endless climb ahead of you.

How could anyone be happy for long if all they see is the climb ahead and not how much they’ve already scaled?

Such is why gratitude is essential to happiness.

Regardless of your situation, there are always things to be thankful for.

Here’s Viktor Frankl describing the little things he was thankful for when he was a prisoner in a concentration camp.

“We were grateful for the smallest of mercies. We were glad when there was time to delouse before going to bed, although in itself this was no pleasure, as it meant standing naked in an unheated hut where icicles hung from the ceiling. But we were thankful if there was no air raid alarm during this operation and the lights were not switched off.”

If prisoners of a concentration camp were able to find things to be thankful for, what’s your excuse to be unhappy?

“How absurd – and a complete stranger to the world – is the man surprised at any aspect of his experience in life!” – 12.13

Life is what it is because of its unpredictability. No one wants to live in a world where nothing ever changes, and everything is predictable. Except for Ron Swanson perhaps…

Life simply won’t make sense if everything is predictable.

One wouldn’t grocery shopping, expecting to meet the love of their life, but it certainly has happened for many.

The only thing predictable about life is that nothing is predictable.

Ok, but what’s the practical advice in this?

“The art of living is more like wrestling than dancing, in that it stands ready for what comes and is not thrown by the unforeseen.” -7.61 “Not thrown by the unforeseen.” Understanding that anything could happen is vital for when ‘unexpected’ things do happen, you are not swept off your feet.

Merely knowing, or even expecting, that things will go wrong, will make you better at handling them. Negative visualization could also help.

“The model for the application of your principles is the boxer rather than the gladiator. The gladiator puts down or takes up the sword he uses, but the boxer always has his hands and needs only to clench them into fists.” -12.19

“That all is as thinking makes it so – and you control your thinking. So remove your judgments whenever you wish and then there is calm…” 12.22

Things that happen are just that, happenings. Nothing that happens is ever by nature, good or bad.

Forest fires kill thousands of animals at a time, yet they are a necessary part of the ecosystem, as it clears old bush and allows for new growth.

A man born with no limbs could go on to inspire millions (Nick Vujicic).

A child who went blind before his teenage years could become driven by his disability, and become one of the word’s most renowned magicians (Richard Turner).

This is why the Stoics argued that all things that happen are neutral and natural. It is up to our judgment to decide it’s nature. Good or bad. This is called Stoic indifference. To continue Marcus Aurelius’ analogy, when someone says something that upsets you or offends you. Simply don’t let it.

Of course, this is easier said than done, so here a strategy that comes in handy:

“It is possible to have no understanding of this and not to be troubled in mind: things of themselves have no inherent power to form our judgments.” -6.52

Thus, it was your judgment that made the event upset you.

Conversely, how could you not be bothered by things if you keep dwelling on it?

“Things of themselves cannot touch the soul at all. They have no entry to the soul, and cannot turn or move it. The soul alone turns and moves itself, making all externals presented to it cohere with the judgments it thinks worthy of itself.

It is up to you to decide whether an event that happens it good or bad. And if you decide good, that is how you will make the most out of it.

Richard Turner could have let his blindness dictate his ambitions. Instead, he saw the ‘good’ in it and made it his reason to work ten times harder to achieve his goals.

And he has undoubtedly achieved ten times more than most people.

“You know what I consider the worst disability of all? Procrastination and laziness.” – Richard Turner

“You deserve what you’re going through. You would rather become good tomorrow than be good today.” – 8.22 Every time you make a decision, a new parallel universe is created where you made a different decision.

There would be trillions and trillions of parallel universes and in at least one of those universes, you have achieved your dream in the next five years, or ten years, or two months, this is up to you. Let’s call that the “Sage Universe.”

The Sage universe you is the version of you that understands the value delayed gratification.

Your goal, therefore, is to think about what the Sage universe you did to achieve that dream in merely x years. And do precisely that, even if it means spending every waking moment on it.

Best case scenario, you are the Sage universe version of you.

You have achieved a whole lot more than what you would have if you didn’t do this.

“Perfection of character is this: to live each day as if it were your last.”- 7.69 Life without death is pointless. Here’s why:

There is no reason to do anything right now if you always have tomorrow.

Why visit your family, chase your dreams, get in better shape now; If you can just do it next month, or next decade or next century?

There is no reason to do anything if it wasn’t for the ever unpredicting death that could strike at any moment.

Any day could be your last.

Such is why we do anything at all with the hopes of getting as much done in life as we can before death.

So remind yourself of death — Memento Mori (remember you will die).

[…] If you find it surprising that journaling could be a useful part of Stoicism, then look no further than Meditations. […]

[…] Thus, in order to be happy, one must only focus on the two factors in life that can be controlled. […]